This October saw the release of the latest version of Windows to the market, a product that has been designed with the new Metro style interface aimed at tablet computers.

It is a product that will be readily taken up in the home PC market but what about the business market where concerns with compatibility will be on everyone’s mind. Typically businesses always delay implementing new operating systems until they are market tested and other software vendors produce compatible versions of their products.

CNC have been testing Windows 8 since its pre-release version and now operate it on several workstations ‘in anger’ to be able to offer advice to our customers as to their best option.

In the case of Windows 8, certainly it is a very different initial experience, the biggest change is the fact that for the first time in the 17 years since Windows 95 was released, there’s no Start menu. Instead, pressing the Windows key opens up the Metro interface: 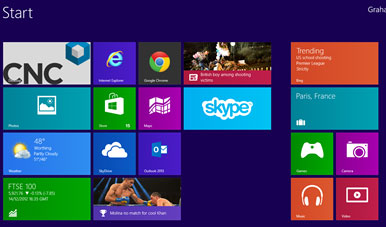 This is a combination of your favourite and other Windows programs (apps) in a tiled format to allow easy access from a touch-screen device, or by clicking with a mouse. Some of these tiles, such as weather can be ‘live’, updating in real time. This tiled interface is common across all Windows devices so is aimed at giving people a familiar experience.

But beyond that, for most users features are available as with Windows 7, but there are the usual changes to the interface you’d expect with any new version of Windows to get to them. It just takes some time to learn them, for example Windows Key + I opens up a settings toolbar on the right, Windows Key + L locks the computer etc.

It certainly appears to be faster starting up and when used in combination with a solid state hard drive, you can achieve a boot up to the logon screen from cold in under 15 seconds.

We have found compatibility with applications to be reasonably good and only one or two still not having working versions. Some needed some changes to our servers to allow products to be installed and one or two requiring upgraded versions of server software to work fully.

That said however, we can’t test everything so if anyone is considering buying machines with Windows 8 loaded on them, please speak to us or any software vendor to ascertain their official support position. Certainly some server changes to allow Windows 8 to correctly work on many of our customers’ networks will be required so for any support customers, it’s essential you consider this before going ahead with any purchases.

For many, it’s probably worth waiting until the end of the first quarter in 2013 before seriously moving but for others willing to take the risk, it will be a case of getting used to it and dealing with any problems as they arise.